Vladimir P Torchilin, PhD, DSc, is a University Distinguished Professor of Pharmaceutical Sciences and Director at Center for Pharmaceutical Biotechnology and Nanomedicine, Northeastern University, Boston. His interests include drug delivery and targeting, nanomedicine, multifunctional and stimuli-sensitive pharmaceutical nanocarriers, biomedical polymers and experimental cancer therapy. He has published more than 400 original papers, more than 150 reviews and book chapters, wrote and edited 12 books, and holds more than 40 patents. Google Scholar shows more than 50,000 citations of his papers with H-index of 100. He is Editor-in-Chief of Current Drug Discovery Technologies, Drug Delivery, and OpenNano, Co-Editor of Current Pharmaceutical Biotechnology and on the Editorial Board of many other journals. He received more than $30 M from the governmental and industrial sources in research funding. He has received multiple honors and awards and in 2011, Times Higher Education ranked him number two among Top World Scientists in Pharmacology for the period of 2000-2010

Tumor therapy, especially in the case of multidrug resistant cancers, could be significantly enhanced by down-regulating the production of proteins, which are involved in cancer cell resistance, such as Pgp or survivin. This can be achieved by using corresponding siRNA. Even better response could be achieved if such siRNA could be delivered to tumors together with chemotherapeutic agent. This task is complicated by low stability of siRNA in biological surrounding. Thus, the delivery system should simultaneously protect siRNA from degradation. We have developed several types of lipid-core polymeric micelles based on PEG-phospholipid or PEI-phospholipid conjugates, which are biologically inert, demonstrate prolonged circulation in the blood and can firmly bind non-modified or reversibly-modified siRNA. Additionally, these nanopreparations can be loaded into their hydrophobic compartments with poorly water soluble chemotherapeutic agents, such as paclitaxel or camptothecin. In experiments with cancer cell monolayers, cancer cell 3D spheroids, and in animals with implanted tumors, it was shown that such co-loaded preparations can significantly down-regulate target proteins in cancer cells, enhance drug activity, and reverse multidrug resistance. In order to specifically unload such nanopreparations inside tumors, we made them sensitive to local tumor-specific stimuli, such as lowered pH, hypoxia, or overexpressed certain enzymes, such as matrix metalloproteases. Using pH-, hypoxia-, or MMP2-sensitive bonds between different components of nanopreparations co-loaded with siRNA and drugs, we were able to make the systems specifically delivering biologically active agents in tumors, which resulted in significantly improved therapeutic response. We have also developed approaches to target individual intracellular organelles to initiate the apoptosis in resistant cancer cells.

Keynote: Therapeutics delivery behind, through and beyond the blood brain barrier

Alain L Fymat is a Medical-Physical Scientist who completed his education at the Universities of Bordeaux and Paris-Sorbonne, France, and the University of California at Los Angeles. He is the current President/CEO and Professor at the International Institute of Medicine and Science. He was formerly Professor of Radiology, Radiological Sciences, Radiation Medicine (Oncology), Critical Care Medicine, and Physics at several US and European universities. His current research interests lie at the interface between science and medicine (Precision Medicine, Nanobiotechnology, Nanomedicine, Genetics/Epigenetics/Ecogenetics), and drug delivery across the blood brain barrier. He has extensively published (~350 scholarly publications) and lectured in several national and international academic, professional, governmental and industrial venues. He is a Board Member of several institutions, Honorable Editor of International Journals of Journal of Cancer Prevention & Current Research, Nanomedicine Research Journal, Journal of Nanomedicine and Nanotechnology, Open Access Journal of Surgery, Nanomedicine, Journal of Nanobiotechnology, Journal of Tumor Medicine & Prevention, Nanomedicine & Nanoscience Research, Cancer Therapy and Oncology, Cancer Research and Clinical Oncology and Biomedical Journal of Scientific and Technical Research

There are approximately 400 known neural disorders some of which being due to a disruption or failure (breakdown, opening, damage) of the blood brain barrier (BBB), while other disorders may still have unknown effects on it. Examples include: meningitis (an inflammation of the meninges or membranes surrounding the brain and spinal cord); epilepsy (chronic or acute seizures caused by inflammation); multiple sclerosis (MS — a disease of the immune system or/and the breaking down of the BBB in a section of the brain or spinal cord); Alzheimer disease (AD — a disease in which amyloid beta contained in blood plasma enter the brain and adhere to the surface of astrocytes); possibly prion and prion-like diseases such as Parkinson disease (PD) and AD; HIV encephalitis (a precursor of HIV-associated dementia in which latent HIV can cross the BBB inside circulating monocytes in the blood stream); and systemic inflammation (sterile or infectious) that may lead to effects on the brain, cause sickness behavior and induce or/and accelerate brain diseases such as MS and PD. There are currently active investigations into treatments for a compromised BBB. As a consequence of the growing aging population, many such neurodegenerative diseases, cancer and infections of the brain will become more prevalent. Here are those disorders requiring treatment by delivery of drugs across, behind and beyond the BBB. It is therefore of utmost importance to grasp the difficulties encountered when attempting to deliver therapeutics at the right brain locations and at the right time-dose fractionations. This presentation will first briefly review the brain diseases and their effects on the BBB, discuss the early discovery and physiological development of the BBB, provide a brief primer on nanoneurology, and discuss the clinical significance of the BBB as a drug target.  The drug delivery difficulties and their limitations, the drug targeting mechanisms (“behind”, “through” and “beyond” the BBB), and describe the novel uses offered by nanotechnology (nanoparticles and nano delivery devices) will then be discussed, followed by suggestions regarding approaches for the enhancement of drug delivery including physiological approaches, chemical and biological delivery, disruption of the BBB system, use of molecular Trojan horse systems. This will be concluded with future prospects in this research field.

Wei-Chiang Shen is currently John A Biles Professor in Pharmaceutical Sciences at the University of Southern California, School of Pharmacy. His research interests focus on the development of novel systems for improving peptide and protein drug delivery. He has published 150 papers in different areas of biomedical sciences. He is a Co-author of the textbook, “Immunology for Pharmacy Students”, and a Co-editor of the book, “Antibody-Drug Conjugates – the 21st Century Magic Bullets for Cancer”. He was elected as Fellow of the American Association of Pharmaceutical Scientists (AAPS) in 1992 and Fellow of the American Association for the Advancement of Sciences (AAAS) in 2000, and was the recipient of the Grand Prize of Eurand Award for Outstanding Novel Research in Oral Drug Delivery from Controlled Release Society in 2002.

During the past decades, many Fc fusion proteins have been successfully produced by biotech companies and approved by FDA to be used as long-acting forms of protein drug. However, there are several limitations on the application of Fc-fusion protein technology to many proteins, especially the stability of Fc-dimerization. In this report, we describe a novel Fc-based drug carrier, single chain Fc-dimer (sc(Fc)2), which was designed to contain two Fc domains recombinantly linked together via a flexible linker. Since the Fc dimeric structure is maintained through the flexible linker, the hinge region was omitted to further stabilize it against proteolysis and to reduce Fc R-related effector functions. Our results indicate that the recombinant sc(Fc)2 preserved the neonatal Fc receptor (FcRn) binding capacity. We have prepared a fusion protein consisting human growth hormone (hGH) and sc(Fc)2 as a model of the novel Fc fusion protein. Compared to the monomeric hGH-Fc fusion protein, hGH-sc(Fc)2 fusion protein showed a stronger binding affinity to FcRn, a longer in vivo plasma half-life of hGH, and a higher hGH-induced plasma IGF-1 level in mice. Our results suggest that sc(Fc)2 technology has the potential to greatly advance and expand the use of Fc-technology for improving the pharmacokinetics and bioactivity of protein therapeutics 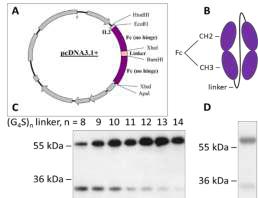